Our Church, Our Place, Our Community 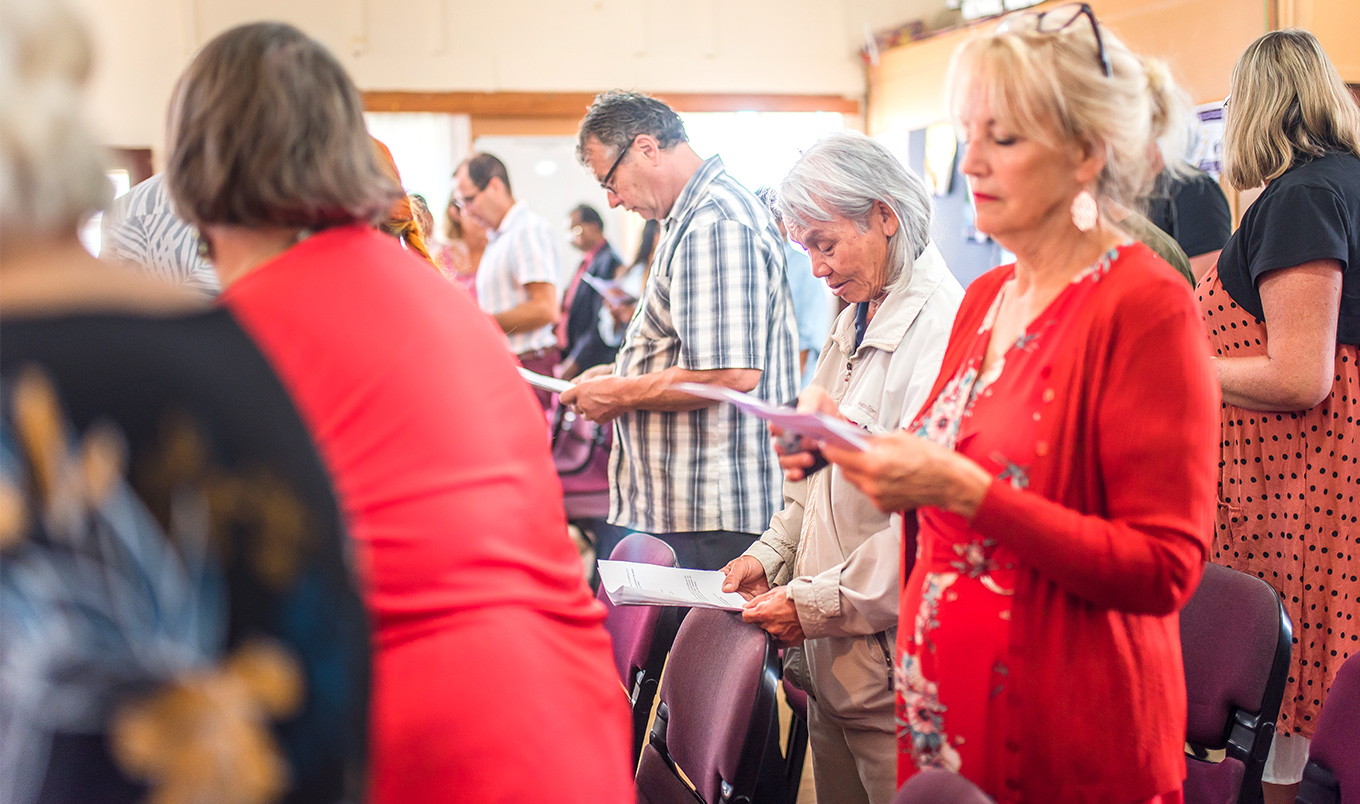 On Sunday 18 September we will return to holding two services:

Praise and worship, including Holy Communion.

Singing is a feature of our worship at St Paul’s in the Park. If you enjoy singing, join us at the 10:15 am service.

Find out more about these services here.

Living in a world overshadowed by COVID-19 means we need to be flexible, so every week we also upload our services to Youtube. Click below to view our Youtube channel.

Our present day church, although placed on the edge of Barry Curtis Park, is surrounded by a mushrooming community. This growing community is a melting pot of culture, ethnicity and faith.

A few years ago it was decided that a new building was needed to meet the demands of this growing community. A design is now completed and our initial estimates indicate that we are challenged with raising 6.1 million dollars to build our new church.

We had hoped to be turning the first sods on our site by now but due to a variety of factors, though primarily COVID and rising costs, the site remains undisturbed. Just prior to Christmas, we were presented with a revised tender from our construction company which quoted $400,000 above what we are able to accept. This meant we were unable to sign off on the contract for stage 1 of the build.

Since then, we have been working on getting that figure down to where it needs to be, including examining the quote detail, tweaking options, looking at alternative sub-contractors (some of which had extremely high quotes, to say the least!)

Meanwhile, we have continued to raise funds despite the best efforts of social distancing rules. As I write, we have secured $4,499,028 towards our target start figure of $5M. Although we have a generous underwrite of $600,000 securing our cashflow, that is based on the original budget and we still need to raise money to repay this.

We are so very keen to make a start on this exciting project. It is a project which will be of great benefit to our Anglican community, but just as importantly, is much needed by the wider Flat Bush community. The facilities will enable us to host a wide range of programmes which will be of significant benefit to the growing and diverse local community. It is an opportunity for our church to reach out to our community and hopefully make a difference.

So, we still need your help! Building seems tantalisingly close but we need to know we can finish what we start. If you are interested in helping, please visit ‘Our Building Project’ on our website. Information on the vision and shape of the project is there, including how to contribute.

Selwyn Seniors is a group for over 65’s. A morning of gentle exercise, fun and friendship with a varied programme.

SPACE for you and your baby is a parenting programme aimed at mainly first-time parents of newborn babies. Sessions are held over 3 terms in a relaxed, baby-friendly atmosphere.

Our vision for SPACE is “empowering and encouraging parents to support the development of the whole child in their first year of life”.

Come along to Sunday School

During our 9.30 am service, our Sunday School runs during the school term. Children can share special items of news they may have, and say a prayer/sing a song together. Bible lessons are presented through varied activities such as stories, video clips, pictures, crafts or a game.

This continued day after day. Finally. The Christian prayed, ‘Lord, if this keeps up, I’m going to lose all my rice. I’ve got a family to provide for. What shall I do?’

In answer to his prayer, the Lord put a thought into his mind. So, next morning he arose much earlier. In the predawn hours of darkness, and started pumping water into the field of his Communist neighbour. Then he replaced the boards and pumped water into his own rice paddy. In a few weeks, both fields were doing well – and the Communist was converted!

‘But if you are willing to listen, I say, love your enemies. Do good to those who hate you. If someone slaps you on the cheek, turn the other cheek. If someone demands your coat, offer your shirt also.’ Luke 6:27,29.

Many years ago, the story goes that a San Diego bank hired a private investigator to track down a bank robber and retrieve the stolen funds. The search led to Mexico. The investigator  crossed the border but then realised he would need a Spanish interpreter. He hired the first interpreter he could find.

After many days, he finally captured the thief and through the interpreter asked him where he had hidden the money. The thief replied in Spanish, ‘What money? I have no idea what you are talking about.’ The interpreter conveys his answer to the investigator.

With that, the investigator drew his pistol, pointed it at the head of the suspect and said, ‘Tell him that if he doesn’t tell me where the money is, I will shoot him in the head.’

The interpreter conveys this message to the thief, who quickly replies, ‘ Senor, I have hidden the money in a can under the fourth floor floor-board, in the second-floor men’s room of the Palacio Hotel on Via Del Rio in La Paz.’

The investigator asks the interpreter, ‘What did he say?’ Th interpreter reflects on the information he has just received and then replies, ‘Senor, he says he is prepared to die like a man!’

Too many of our problems in our society can be put down to a focus on materialism and self. The extreme of this preoccupation can be defined as greed, and the problem with greed is that invariably it is accompanied by a loss of integrity.

Whether it is in business or just our dealings with one another, the integrity and honesty foster trust and respect, and therefore, a meaningful relationship.

‘Fix your thoughts on what is true and honourable and right.’ Philippians 4:8

There was a little fish who swam up to its mother one day and said, “Mum, what is this water I hear so much about?” Laughing, she responded, “You silly little fish. Why, it’s around you and within you and gives you life. Just swim to the top of the pond and lie there for a while; then you will find out what water is.”

Then there was a little fawn who walked up to her mother and said, “Mum, what is this air that I hear so much about?” Smiling, she said, “You silly little deer. Why, air is within you and around you. Air gives you life. If you want to know what air is, stick your head in the stream and you’ll find out.”

Finally, there was a certain young man who was beginning his spiritual journey. After having difficulty knowing where to turn, he asked a holy woman, “What is this God I hear so much about?….”

The interesting thing about God is that he is within us and all around us, but too many of us are unaware of him. I believe that well-known verse from Matthew is very applicable here.

He was born February 12 1809 in a Kentucky log cabin. His parents were poor, honest and devoutly religious. They lived enduring ideals of truth and honesty, and taught them to their son.

As a young man, he worked as a clerk in a general store near Salem, Illinois. One day, he inadvertently overcharged a woman six cents. After closing for the day, this conscientious clerk took the lady her change, a round trip of several miles on foot.

On another occasion, when there were more customers in the store than usual, the young man gave short weight to a customer. Upon discovering the error, at first opportunity he tied up the four ounces of tea due to the shopper and walked a great distance to deliver it.

The man, of course, was Abraham Lincoln, and he carried this same honesty into his law practice, politics, and ultimately the presidency of the United States. His character was so impeccable that he truly earned the nickname, ‘Honest Abe.’

‘Blessed are the pure in heart for they shall see God.’ Matthew 5:8

Honesty earns respect from others and cultivates a close relationship with God. And a final word from another US president, Thomas Jefferson. ‘Honesty is the first chapter in the first book of wisdom.’

A traveling salesman was working in a rural area. One day he came upon a farmer sitting in a rocking chair on the porch of his rather rundown house. After introducing himself, he launched into his pitch, saying. ‘Sir, I have a book that’s worth its weight in gold. It describes how to farm your land ten times better than you’re doing now.’

The farmer continued to rock. Then, after a long pause, he said, ‘Young fella, I already know how to farm my land ten times better than I’m doing now. My problem isn’t knowing what to do. It’s doing it.’

We’d love to hear from you

For any general enquiries or to find out more about St Paul’s in the Park, please get in touch.